David Briscoe was honored in 2012 by Michio Kushi and Kushi Institute International with a prestigious Aveline Kushi Award, regarded by many as “the Oscar of macrobiotics, ” for his decades of dedication to macrobiotic education and counseling.

David is one of the most experienced macrobiotic teachers and counselors in the world today. Since 1972 he has gained expertise in every facet of macrobiotics, including personal practice, philosophy, healing principles, teaching, counseling, private healing chef service, restaurant ownership and educational center development.

He is widely considered one of the finest of macrobiotic chefs, having prepared countless delicious meals, including gourmet Hollywood buffets and ethnic international macrobiotic cuisine for large groups and events, and strengthening healing meals for health recovery for private individuals.

Through his 30+ years of cooking classes, chef-training programs, executive chef experience, co-owner of the award-winning Amber Waves Café, and world-wide travels, he has taught innumerable students the creative joy of healthy macrobiotic cooking. His private macrobiotic chef services are highly sought after and available to a limited number of selected clients.

One of the most experienced and respected public speakers in the world of macrobiotics, David now offers private public speaking training and mentorship to those wishing to develop their skill and confidence in this area.

In 1975 he was given the honor of being one of the few one-on-one macrobiotic apprentices to the late macrobiotic master, Noboru Muramoto, author of Healing Ourselves. In 1983 he was among the first to be certified by the Kushi Institute’s premier macrobiotic counselor accreditation program. During the 70’s and 80’s, David established macrobiotic education programs and centers throughout the U.S.

He has appeared on national TV programs and radio shows, including Dr. John McDougall’s radio show and numerous other live radio shows, ABC News, PBS, and the HBO® Special, “Six Months to Live.” He is the co-author of A Personal Peace, contributing author to The Whole Mind and a regular columnist for Macrobiotics Today, the world’s leading macrobiotic magazine.

David has developed macrobiotic curriculum and instruction programs for various educational organizations, applying his experience as a former secondary school teacher and as a trainer of teachers at the University of Kansas. He is a macrobiotic education visionary who first made use of the power of the internet for macrobiotic teaching and counseling, and has become the leader in developing online multi-media macrobiotic courses and training, starting over 15 years ago.

In 1990 the late macrobiotic master, Herman Aihara, invited David to be his administrative, teaching and counseling associate at The Vega Study Center in California, and from 1991-1998 David worked closely with Herman. After Herman’s passing, David co-founded Macrobiotics America and Macrobiotics Global, the first macrobiotic organization to offer multi-media distance learning courses via the internet (www.macroamerica.com), beginning in 1999.
David travels and teaches throughout North America and overseas, speaking to medical and lay audiences and as a featured presenter at the major macrobiotic camps and conferences, including The Kushi Institute Summer Conference, French Meadows Summer Camp, The Fall Health Classic, and The Whole World Summer School in Belgium.

He has also served as a guest faculty member at the world-famous Kushi Institute in Becket, MA. David holds the honorary position of being a macrobiotic counselor for The George Ohsawa Macrobiotic Foundation of Chico, CA, the oldest macrobiotic education and publishing organization in North America. David was recently invited by Texas A&M University to participate in the design of a residential program to help patients recover from bowel conditions, such as IBS, through a macrobiotic diet.

David experienced personal healing through his implementation of macrobiotics, beginning in 1972 at age 22. He recovered from supposedly incurable emotional/psychological illness and dependence on medication that he was told he would have to take for the rest of his life. His story is recounted in the book, A Personal Peace, written by David and his mother, Charlotte Mahoney-Briscoe. This wonderful experience of “impossible” healing lead to David becoming the main advocate for the application of macrobiotics to psychological healing, and the most referred to macrobiotic consultant by organizations and doctors seeking macrobiotic healing support for patients in need of emotional and psychological healing. Additionally, through macrobiotics, David recovered from many physical health problems that had dogged him since childhood.

A love of written words led David to begin writing poetry and short stories at the age of 8. He is a published poet and non-fiction author
David was awarded a grant for poetry publishing by The National Endowment for the Humanities. He has taught classes in creative writing and writing for healing. His exploration of other artistic expression has taken him into the world of multi-media art, with numerous accolades for his work. He has been invited to present a series of on-going West Coast exhibitions and “poetry performance evenings” throughout 2016.

David lives in Northen California with his wife, Cynthia, and children, Justin, Nora, Iris, Ana and Rio, and nearby his grandchildren David, Micah, Gracie, Ella and Ava. 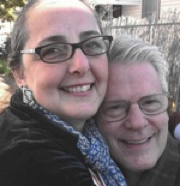